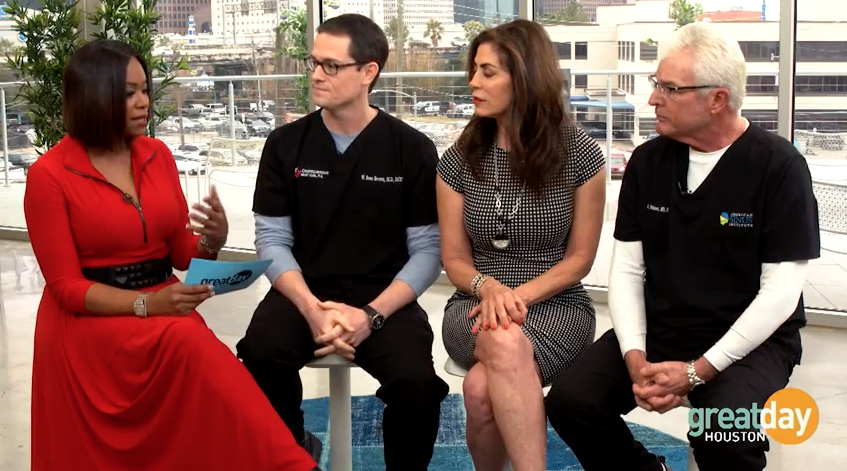 Deborah Duncan: Good morning everyone and welcome to Great Day Houston. It is medical Monday and this is heart month. As we know, there are all kinds of things that can lead to the malfunction of your heart. Diabetes, certain drugs, AFIB. And a new study looks at how a migraine may be a risk factor for heart disease as well. Plus, as Americans spend more and more time on their smartphones what does science say now about a possible cancer link?Let's find out in medical hot topics. And on our panel this morning, we have Dr. William Ross Brown who's an interventional cardiologist, Dr. Terri Alani, family and cosmetic dentist, and Dr. Robert Palmer, a head and neck surgeon. Good morning.

‍William Ross B.: That's right. This was a fairly large study out of Denmark that showed an association with migraines and a higher risk of heart disease. It's interesting. It's an observational study so it's important to remember that it needs definitely warrants more study, but it is an interesting association.

‍Deborah Duncan: Yeah. All right. But can we also look at just any kind of stress that you would put on the body. If your heart is teetering anyway-

‍Deborah Duncan: Any kind of stress on the body could probably trigger a heart attack?

‍William Ross B.: Well recently we've been talking about flu a lot and that's a generalized inflammation state. And so any stress on the body can increase blood pressure and increase the risk of heart problems.

‍Terri Alani: And maybe what that study maybe it is a wake up call for people that do have intense migraines, maybe to seek preventative measures and see a cardiologist and just be tested.

‍Deborah Duncan: Yeah, yeah. We were talking about there are around the holidays between November and December, there are a lot of folks who have heart attacks because it's induced by the food that we eat.

‍William Ross B.: Right. It's all about risk factors really. Do you have family history, high cholesterol, diabetes, high blood pressure, and any additional stressor like alcohol or dietary changes can really-

‍Deborah Duncan: So to your point, make sure your heart is healthy.

‍Deborah Duncan: Yeah. Go get checked and make sure it's healthy. All right. The difference between colds, sinus infection, flu, all of them kind of share some symptoms. And a lot of times, in the beginning, people try to figure it out or thinking, "Is it the flu? No. Probably it's just a cold. Maybe it's not a cold. Maybe it's the flu." And then maybe it's sinus issues.

‍Terri Alani: So what would you say because we get a lot of patients, first of all, if you have the flu, please do not come see the dentist.

‍Terri Alani: That's all I can tell you.

‍Deborah Duncan: Or have a cold.

‍Terri Alani: But my question is you see so many people that have a head cold or whatever and they automatically decide they need to be on antibiotics. What's the answer to that?

‍Robert Palmer: I discourage it. It should be a protractic problem and then you should be evaluated where you can tell if it is truly a bacterial infection. If you go on antibiotics for a viral infection, it's not really gonna help you. And it has so many side effects.

‍Deborah Duncan: Yeah. And the CDC-

‍Robert Palmer: It can mess up your GI tract.

‍Deborah Duncan: Yeah. And the CDC will say one of the biggest issues they have is how many times people are over medicating with antibiotics and so when you really need those antibiotics to work, they're not working.

‍Terri Alani: But does it usually go away on its own? Because I was very sick in January and I actually went to the doctor and they did put me on antibiotics because they thought I had a secondary sinus infection, but are you saying that sinus infection ultimately will just  go away without antibiotics?

‍Robert Palmer: In most cases. People get into chronic sinusitis, which is where they have changes that never go away or they have recurring acute episodes, which we classify as chronic sinusitis. But basically most people get a sinus infection, even if they didn't go on antibiotics, will eventually get better. It may take a while. So I'm not opposed to antibiotics.Once you find out and can feel safe that you've diagnosed a bacterial-

‍Deborah Duncan: Right. That it actually is an infection.

‍Terri Alani: And is it too late to get a flu shot?

‍Deborah Duncan: Apparently it's never too late to get a flu shot. Especially this year.

‍William Ross B.: And I wanna add to that too to be careful about over the counter cold medicines. Because they can interact with heart medicines and heart conditions.

‍Deborah Duncan: Yeah, yeah. 'Cause that's a big issue. A lot of times what we do is we grab the one that has all the symptoms on it and just say, "Okay. That one is probably the most effective." And take that. And then if it's not working 45 minutes later, we'll take another one, right?

‍Robert Palmer: Well the problem with over the counter, they always put a decongestant with the antihistamine. And decongestants are essentially cardio vascular drugs. They increase your blood pressure and so on. And you can't use those much longer than four to five days.

‍Deborah Duncan: Yeah. Which the important thing go ask the pharmacist. I think a lot of times people forget that the pharmacist actually knows what those interactions could be and they're there to help you. Even with the over the counter stuff. Walk up and say, "Hey, look. These are my symptoms. Here's what I'm taking otherwise. What should I do?"

‍Deborah Duncan: Yeah. Exactly. All right. Up next. Could Botox stop teeth grinding? Botox is a miracle.

‍Terri Alani: Botox is awesome. We all love Botox, all the ladies out there, but absolutely-

‍Deborah Duncan: I just get it for teeth grinding.

‍Terri Alani: Absolutely yes. It's safe and it's effective. We do it in our office. What you try to do is you inject the Botox, it's painless, into the two major muscles that clench when you grind. It's your masator muscle and your temporals muscle. And so unlike a night guard, which actually just keeps you from grinding, the Botox actually addresses the problem. So yes, it works wonderfully.

‍Deborah Duncan: Can we get like a little right here?

‍Deborah Duncan: And a little right here too.

‍Deborah Duncan: You have some extra left over there. All right. It seems like everything causes cancer or heart disease. And so is there a cancer link with cell phones? There's a study that tested cell phone radiation on rats and they found a very weak link between cell phones and cancer. So kind of reaffirming what I think we've heard before in certain things.

‍Terri Alani: Deborah, I think that you have a higher chance of having a car accident, talking on your cell phone, and texting, than you do getting cancer from a cell phone.

‍Deborah Duncan: Yeah, yeah. All right. And finally, I love this. This is another study that keeps coming up for every single ailment there is. Could two drinks a day help fight Alzheimer's? And could drinks help fight heart disease? All those types of things.

‍William Ross B.: We do see a connection between alcohol and the prevention of heart disease. Of course in moderation. I think overall, we were talking about a general inflammatory stress on the body then alcohol has been shown to minimize that.

‍Deborah Duncan: Okay. It's like two doses a day could increase the function of lymphatic system, which removes waste products from the brain. So drink up people, but I think it's all in moderation, as you say.

‍Deborah Duncan: Yeah, that's the key right there. All right. Thank you all very much.