What Are Nasal Steroids? 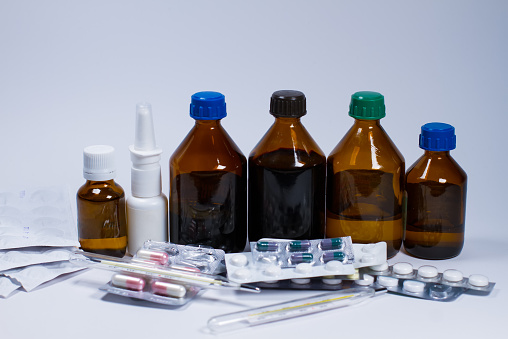 What Are Nasal Steroids?

Nasal steroids are corticosteroids similar to the cortisol produced naturally by the body. People with nasal allergies may not produce enough cortisol to combat the effects of pollen, dust and other particles that cause sneezing, itchy eyes and coughing. Nasal steroid products can help to relieve these allergy symptoms.Medical experts estimate that one out of five people experiences allergies at some time in their lives. Many people have chronic sinus conditions stemming from allergies.Corticosteroids sprays relieve swelling in the sinus passages. They help to control mucus and congestion so that particulates in the air are less irritating. Particulates include animal dander, pollen, mold, mildew and dust.Allergies are most common in the spring when trees, flowers and grasses pollinate. The invisible particles float through the air and they can find their way into nasal passages in seconds. These pollens can trigger allergic reactions in people. Changes in the weather can also affect people sensitive to air pressure.

The corticosteroids are sprayed directly into the nose. Fluticasone propionate, known as Flonase, and triamcinolone, known as Nasacort, are available over the counter at pharmacies. Stronger nasal steroids require a prescription. A doctor should be consulted before purchasing even over-the-counter steroid products.Users of these nasal steroids must follow the enclosed directions. The spray has to stay in the sinus passages to be effective. It should not drip down the throat.Most doctors do not consider nasal steroids to be harmful, if used according to directions. They may be used along with antihistamines and decongestants. A doctor may prescribe antibiotics for a severe sinus infection and recommend that the steroids not be used until the problem has cleared.

An allergic reaction such as a stuffy nose and sinus pressure usually occurs when a particulate or other substance interacts with the immunoglobulin E (lgE) proteins in the body. Circulating granulocyte cells bind with the lgE and release histamines, sending a message that they don’t like the intruder.Allergies related to pollen and grass can happen at any age. While most people become aware of their hypersensitivity to allergens before the age of 10, it is not unusual for adults to find they have allergic reactions as well. Each person is different. A body may not react to pollen and other particulates at a certain level. Allergy symptoms start when the level of airborne particles increases above the body’s ability to absorb them without reactions.A very wet spring in some areas may produce above average pollen causing more people to experience allergic rhinitis. Location and exposure to the elements play an important part in these allergies, also called “hay fever.”People moving from dry to damper locations may experience allergy symptoms based on increased pollen count or the presence of mold spores. The reverse is also possible. People living in a damper climate may react to a dryer, dustier climate with nasal allergies after a move.Airborne particulates are the major causes of sinus allergies, but other factors can also cause problems. Certain animals may have dander that irritates the nose. Nitrates in food and sulfites (SO2) in wine and some dried fruits can cause nasal membranes to swell in some individuals. Others are allergic to insect stings or to insect droppings. Dust particles are the droppings from dust mites. Getting rid of the mites solves this problem.Certain nuts and seeds can trigger allergies in some people. These reactions may be more severe than just sneezing and sinus pressure.

The reaction may start with a sneeze, but it can lead to coughing. This can also lead to swelling in the sinuses, throat and chest. The frontal sinuses in the forehead, maxillary sinuses in the cheekbones and under the eyes can swell and throb. The Eustachian tubes can become clogged. Itchy eyes can lead to conjunctivitis. Nasal polyps that block the flow of air and mucus can also develop over time.Asthma, mucus in the lungs, is an allergic reaction that often accompanies sneezing and sinus congestion. Inhaled aerosol corticosteroids, similar to nasal steroids, are often used to contain asthma. Albuterol inhalers are used for quick asthma relief.

Many doctors specialize in treating allergies and sinus conditions as they are very common. Nasal steroids or other sprays that shrink sinus membranes temporarily are often recommended as the first line of treatment. More intense treatments are available for chronic sinus conditions.The American Sinus Institute offers the Honrubia Technique for Balloon Sinuplasty. This is a minimally invasive technique for relieving chronic sinusitis. A tiny balloon catheter is used to open the blocked sinuses and allow mucus to drain. The sinuses remain open when the balloon is removed. Contact the American Sinus Institute for further information on nasal steroids and other sinus treatments.