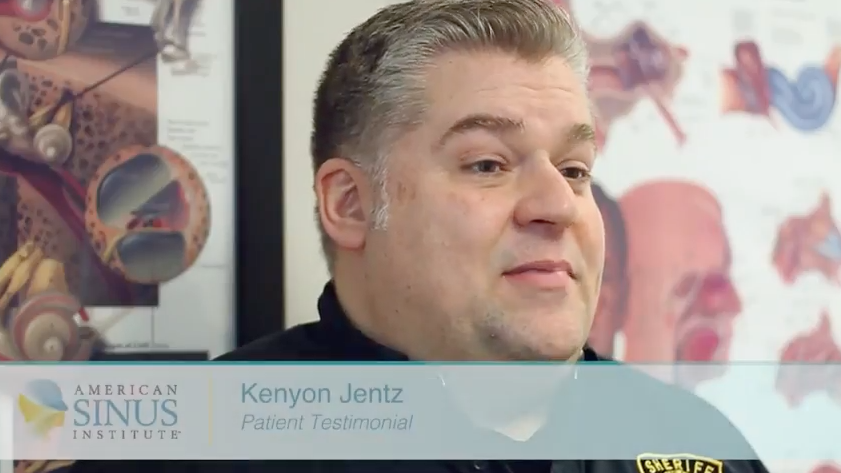 Listen to Kenyon Jentz's patient testimonial as he shares his experience with the balloon sinuplasty procedure and how the American Sinus Institute improved his quality of life.

Kenyon Jentz: About 12 years ago I was diagnosed with sleep apnea, pretty severe. I had a lot of issues breathing. I would actually wake up gasping. I had looked online about different procedures. A lot of the older traditional methods seemed a little too invasive for my taste. I think I was a little scared of that, having surgeries with the recovery time was a lot longer than what I had been looking for.Until a buddy of mine had told me about the Sinus Institute and an in-invasive procedure he had done where he was back to work basically the next week. I was very interested in finding out what that was. I had the surgery on a Friday and I was actually able to return to work on Monday, so I was very happy with that. That day, I had a little discomfort, a little bit of pain. I had a lot of procedures done. It was a little bit of discomfort. I had some pain medicine to help me with that, and I actually healed a lot more rapid than I anticipated.I actually explained to the doctor when I came back that this has been a life-changing experience for me. Being able to breathe so well, it's given me more energy. I sleep better at night. I've actually fallen asleep without my sleep apnea machine, which I've never been able to do before without waking up gasping for air. I've actually taken naps for an hour or two long and woken up later and just been actually amazed that I was able to sleep without my machine.The research I saw online regarding the more traditional procedures, it was a little too much than what I could bear, I think. Some videos showed where they actually carved out holes in the people's sinuses and had packing materials put in there for six to eight weeks afterward. There's a lot of videos of people having their packing removed, and when I watched that I just thought, "How terrible to suffer for six to eight weeks," and I had no idea there were newer, more innovative surgeries that could be done and procedures that would not have to put me through that mess. I was very pleased to find out about these new procedures.Coming to the American Sinus Institute, it was very relaxing. They were very informative. They told me so much about what was going to happen to me that I was actually kind of amazed at the detail that they were willing to share with me, actually, about what was going to happen. I literally had no questions about what was going to happen.I don't know how long these procedures have been out, but I wish I would have known about this 10, 15 years ago. I would have definitely had it done a lot sooner, and I would highly recommend anybody who's thinking about this or has issues breathing or with allergies or sinus issues to look into it. It'll change your life. Definitely changed my life. I highly recommend it to anybody who's interested. At least get some information, educate yourself about these new procedures.